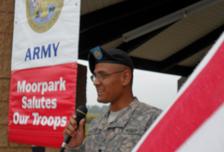 On June 10, 2011 a young soldier came home after a one year tour in Afghanistan. He flew in to LAX at 4 pm and as you know traffic was heavy and all Robert wanted was "That's right" an In-n-out burger. We knew it would take at least 2 hours to get home but at the same time it was not a good idea to get home early since for the last 3 weeks his Dad and Mom had been planning a welcome home with Family and friends and it was already in the papers. Getting home too early before sunset might jeopardize being seen since this Welcome Home was not to take place till the following day and didn't want to be approached by anyone that evening. So Mom got on the phone and found an In-n-out in Westwood and were only 15 minutes away but closer then waiting for 2 hours. We finally got to the destination and enjoyed a three by three and animal style fries! This was way overdue but probably the best burger he ever had. We went for a little walk killing a little more time and then on the way Home and his own bed. Once we got there, as tradition had it, the morning after he always takes Mom out to breakfast. "Mom this is what I'm wearing to breakfast tomorrow morning," as he looked down from the upstairs rail showing her a pair of shorts and a t-shirt. Mom responded "that's not tradition" and he knew tradition that he had to be in uniform. "Oh well" that was that besides he needed to be in uniform for what we had coming to him.  Next morning off to breakfast at 8 am but couldn't take him locally since he could be seen...so off to Northridge to have breakfast at Mimi's Cafe. You see, Mom's job was to keep him busy till 11 am and after breakfast they were to drive to Borders in Simi Valley (since that was one store Robert loved to go to)so here we go. After spending as much time as possible at Borders Mom realized that it was not 11 am so off to the restroom together with her youngest daughter Victoria (who played a very important part) while in the restroom at borders Mom was in contact with Dad letting him know Robert was ready to go but it wasn't 11am yet so they had to stay in the restroom a little longer. As Robert was at the registers paying he noticed a few motorcycles in the front but didn't give it much thought. Well finally, Mom and  daughter came out and walked together with Robert as he stood there in a SURPRISED look as 22 motorcycle from the Patriot Guard riders and three cars of friends and thankful Veterans Americans applauded with appreciation hugging, thanking him and embracing him as they were all standing on both sides and displaying a Welcome Home banner! What a moment even-though Dad could not be there! After this, one of the Patriot Guard Riders approached Robert and said "your Dad would like us to escort you home".


Robert knew that Dad had something to do with this when he stepped out of Borders but had no idea what was waiting for him next as they drove to Moorpark. By the way Victoria, his younger sister, was texting Dad as they got close to the destination which was Mammoth Park. Robert new something else was happening as the lead of the Patriot Guard riders rode past the entrance. They followed into the park, where the park had neighbors, friends, family, Our Mayor Janice Parvin and many more people Americans waiting for him.  As he approached us, Moorpark High School Band started playing Celebrate by Kool and the Gang what a rush as everyone was in outstanding showing of  SUPPORT,  PROUD and PRIDE waving American Flags and displaying banners one of them "WELCOME HOME SON". This was covered by different newspaper but not all was moment of joy when Robert got the microphone he asked for a moment of silence as he explained that one of his brothers Rudy Acosta had not made it back this moment was heart felt and deeply hurtful. We have a tendency to show support when someone has passed on we also need to EMBRACE our living and show them the same RESPECT. Robert and many others that day could never forget that day a well-deserved "Welcome Home Son" or daughter and any other Family Military Members coming back home. As a Father please help me Welcome them home and CELEBRATE as we now have  the Welcome Home Ruvalcaba Foundation which will be bringing you the First Annual Moorpark Salsa Festival scheduled for June 15th and 16th 2013 Father's Day weekend. So come share, embrace, give and support our Military. This will be an event that will continue for years to come because our please deserve it. Join us as we "Bring a little Spice to Moorpark".

THANK YOU FOR YOUR SUPPORT,

TO ALL WHO SERVE 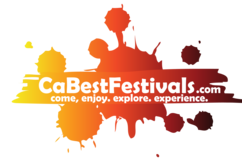